Leah Garces is the president of animal rights organization Mercy For Animals, which often plays second fiddle to larger organizations including the Humane Society of the United States. She joined MFA in 2018 after serving for several years as executive director of the fledgling US branch of Compassion in World Farming. While she has positioned herself as someone focused on “improving” the meat industry, she is a vegan and would prefer to see the end of people eating meat, dairy, and eggs altogether.

Her work has largely focused on issues relating to chickens and harassing companies. Garces believes that pressuring corporate executives is an impactful means of ensuring change in the real-world and a method to disrupt conventional farming methods.

Like many animal rights activists, Garces is a vegan who has dedicated her life to fundamentally changing the world of animal agriculture.

Upon becoming the president of Mercy For Animals, Garces stated in an interview that, “I envision this organization becoming even stronger and more effective, a model for the whole movement”.

Yet Garces’ track record at CIWF makes one wonder if she’s capable of running a larger organization—and whether she can attract grassroots support.

If you’ve never heard of Compassion in World Farming, you’re not alone. CIWF is based in the UK, but its US branch incorporated in 2013, according to IRS records. Tax records show that Garces relied heavily on a handful of wealthy donors to fund her insignificant operation, which only had three staffers. In 2015, Garces’ compensation accounted for about one-third of the organization’s expenses.

By 2016 (the most recent year information in available, as of this writing), 75% of CIWF USA’s income came from three foundations—the largest coming from the Open Philanthropy Project, a sugar daddy that has funneled $64 million into animal activist groups since that year. (CIWF USA received another $1.5 million from the foundation in 2018.)

Garces likes to present herself as the sort of activist who cares more about animal welfare than the abolishment of all animal agriculture. In interviews, she uses terms including “reduction,” “improving,” and discusses the “diversification of protein.”

In her writing, there are flashes of thinking more readily identified with conspiracy theorists than animal lovers. One blog accuses the agricultural sector of issuing death threats to a company making an egg-free mayonnaise alternative.

Despite this facade of animal welfare, MFA under Garces remains heavily committed to veganism, posting sensational stories about animal agriculture on its blog and urging the site’s visitors and supporters to make the switch to a plant-based diet.

In a 2005 paper she co-authored, Garces lists a number of recommendations for global authorities to ban large-scale livestock farming. One of the recommendations? “Improve farmer knowledge about animal health and welfare.” There’s something rich about vegan activists telling farmers, who have been raising animals their entire lives, that they don’t know what they’re doing.

Garces is the author of the book Grilled: Turning Adversaries to Allies in the Fight to Change the Chicken Industry. She received a degree in zoology from the University of Florida and went on to receive her master’s in Environment and Development from King’s College London.

Leah Garces is connected to the following organizations: 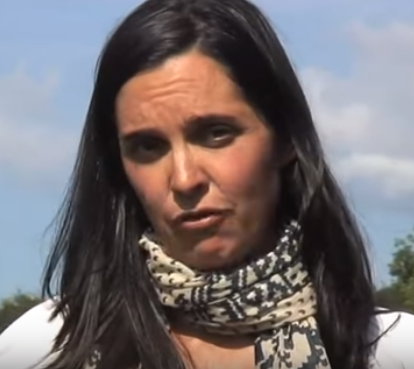