George Goehl is a radical community organizer and “Occupy-movement guru” who currently serves as the executive director for the controversial network of left-wing organizing groups, National People’s Action (NPA). Under Goehl’s leadership, NAP utilized mob intimidation tactics to bully executives, government officials, and others whose policies the organization disliked.

Despite the fact that he has made a career out of demonizing the so-called 1%, Goehl earns more than twice the median household income in Chicago. While twenty-two percent of Chicagoans live below the poverty line, Goehl lives it up in a neighborhood littered with million dollar homes.

Once a “hungry young drifter” dependent on a soup kitchen for assistance, Goehl rose quickly through the progressive organizing ranks. Goehl first became active in community agitation when he founded the Coalition of Low-Income and Homeless Citizens.

Shel Trapp, a Chicago-based organizer and a disciple of Saul Alinsky (the founder of modern community organizing) took notice of Goehl’s work and brought him into NPA. Under Trapp’s leadership, NPA activists stalked their opponents at their homes, the homes of their parents, their work, and everywhere in between. Trapp found the practice to be “great, effective fun.”

Goehl studied the commandments of Chicago-style community organizing under Trapp, and set out to recruit new members to join Blocks Together, an allied organization of National People’s Action— his first hands-on experience with NPA’s multi-state network of community groups founded in 1972 by Trapp and Gale Cincotta.

As Goehl grew into his radical surroundings, he became frustrated with Alinsky-style organizing. The tactics of Alinsky, the man who famously claimed that he’d rather go to hell than heaven—that way he could be with people like him, were apparently not radical enough for Goehl.

Since returning to NPA, Goehl has worked to protest the Obama administration for deporting illegal immigrants, utilized dangerous tactics to terrify his opponents and their families, and organized the anarchist Occupy Wall Street movement— the mass sit-in whose members were responsible for assaulting police officers and hurting small businesses. Goehl worked to organize Occupy events around the country and created the “99 Percent Spring,”an organization built to train 100,000 additional agitators to spread the Occupy movement around the country.

Under the leadership of Goehl, NPA has focused on intimidating its opponents. Goehl not only endorses these actions, but has led dangerous protests onto the doorsteps of his enemies, targeting them and their families at their own homes.

A notable example of this occurred in May 2010, when a Goehl-sactioned protest included roughly 500 NPA and Service Employees International Union (SEIU) activists who poured onto the lawn of Greg Baer, deputy general counsel for corporate law at Bank of America. The agitators marched onto his porch—waving signs and condemning him for his “greed.” Their actions so terrified the only member of the Baer family home at the time, Baer’s teenage son, that he was forced to lock himself in a bathroom and wait for help. When Baer arrived home, he had to fight through the mob of protestors just to get inside his home and ensure his son was safe.

Baer’s neighbor, Fortune Magazine writer Nina Easton, reported that the assault on Baer was only one of the group’s targets for the day; Goehl and the rest of the activists then packed into 14 school buses and moved on to repeat their tactics at the home of JP Morgan executive Peter Scher.

Two years after the protest of Baer, Goehl led more than 1,000 people in a protest at Treasury Secretary Tim Geithner’s suburban home to demand that he and the Obama administration support a financial speculation tax on banks. Again, Goehl and his mob blocked traffic and intimidated an entire neighborhood to try and get their way.

George Goehl is connected to the following organizations: 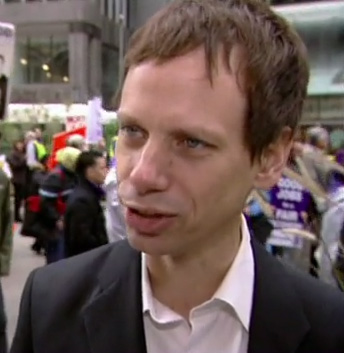